When
lifestyle blogger Maggie Kern bought her 1960s ranch home in Charlotte, N.C.,
its old red-orange brick and rotting teal shutters simply didn’t suit her
style. “I like everything clean and simple with a Boho flair to it,” she says.
With an active toddler underfoot, Kern needed a fast, easy fix that better fit
her aesthetic. To freshen up the façade, she paired new shutters and paint in a
pretty mix.

A Clean Slate
To create a light, modern underlay, Kern, the blogger behind Polished Closets, first had the home’s entire exterior painted white. “With a white background, you can change up the accessories to keep a simple feel with added interest,” she says. Classic black dresses up the ironwork and gutters while also creating contrast. The deep emerald green of the front door was inspired by the color of her grandmother’s door when she was growing up. 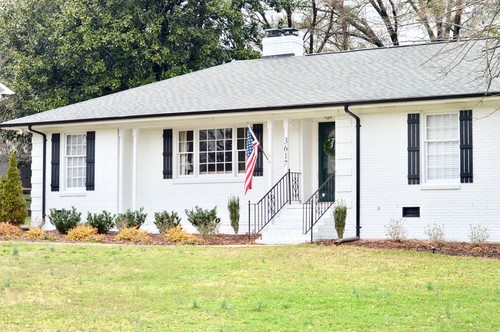 A
tried-and-true Southerner, Kern wanted shutters both to keep to the local
architectural aesthetic and to infuse a pop of personality. “I think shutters
add a cool design detail to any house—they can really change the look and
feel,” she says.

Though
most of their neighbors had open-louver or raised-panel styles, she and her
husband, Neil, chose pre-colored Vantage board-and-batten shutters with spacing. “It’s
fun to peek through the boards and see the [home’s] paint underneath,” Kern says. 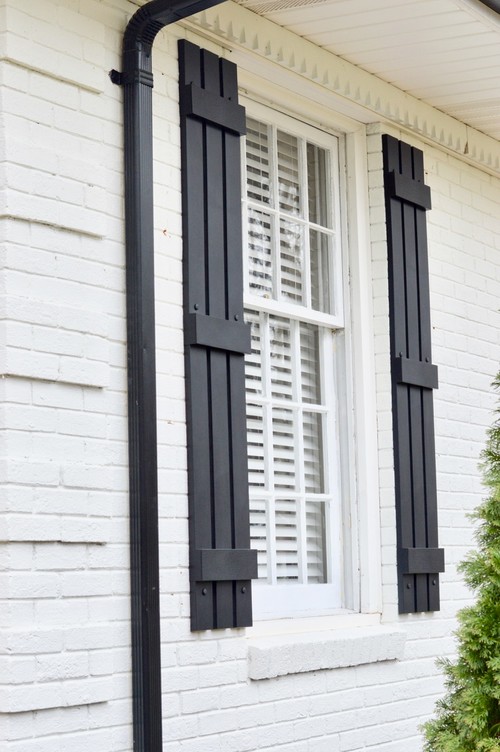 Made of easy-care PVC with a wood-grain effect, the shutters shouldn’t crack, peel, or fade. “I already have too many things to maintain in my life—this is one less thing to worry about,” she says.

Painless Process
From start to finish, the work took a week. Professional painters from Beyond the Paint in Waxhaw spent three days prepping and painting the exterior. The next Saturday, Kern had the shutter company help with the shutters, though she was able to do most of the installation herself.

Since the
shutters were surprisingly lightweight, Kern lifted them into place to align
with the brickwork. She then drilled holes through the shutters and into the
mortar between the bricks, hammered in matching fasteners, and hung the shutters. “It was so easy,”
she says. Putting up nine sets of shutters took just a few hours.

Seamless Style Throughout
Inside the home, black accents, flashes of emerald, and a clean, airy white palette happily harmonize with the exterior. “It looks nice and clean and modern outside, then you walk in and it feels the same,” Kern says. Warm wooden furniture beckons people to sit a spell, cats Gracie and Olive lounge lazily in sunny spots, and tall plants wave their fronds pleasantly at guests.

The End Result
These days the house presents a crisp and cheerful face to the street. “It now makes a good first impression,” Kern says. The paint gleams and, thanks to their durable material, the shutters still look bright. “It’s always the details that make a whole look come together. And the shutters were the perfect finishing touch.”

We use cookies and other automatic data collection technologies to collect authentication information and information about your device, browsing actions, and patterns. To learn more about how we use cookies, including how to disable them, and to learn more about our use and collection of personal information and your rights, view our Privacy Notice. By clicking "OK" or by using our website, you agree to our use of cookies unless you have disabled them. OK Privacy Notice
Privacy & Cookies Policy

Any cookies that may not be particularly necessary for the website to function and is used specifically to collect user personal data via analytics, ads, other embedded contents are termed as non-necessary cookies. It is mandatory to procure user consent prior to running these cookies on your website.