The beauty of architectural history repeating itself

With its striking steeple and massive trinity-style windows, The Dennis Union Church has served multiple generations of families in historic Dennis, Massachusetts, nestled on the bicep of Cape Cod’s arm. The community’s past is rich with clipper ship captains, the invention of modern cranberry cultivation and the nation’s first solar-evaporation salt production works, devised to reduce salt imports and meet the needs of the Continental Congress in 1776.

The Dennis Union Church sanctuary dates to 1838, though the church itself was established in 1727, when Rev. Josiah Dennis, eventual town and church namesake, was seated as pastor.

To honor the church’s historic-district status and vibrant past, a church building committee was established to turn back the clock on its exterior. “We started out with a church, that although nearly 200 years old, suffered from historically-insensitive renovation. The flat siding and shutters added decades ago just didn’t look right and didn’t look historic,” said Brad Crowell, who chaired the building committee and whose family tree in Dennis reaches back to the 1600s.

“We were able to restore the church’s historic appearance with a grant from the town of Dennis via the Massachusetts Community Preservation Act. Anything we did had to comply with very strict U.S. Department of Interior standards for historic preservation,” Crowell noted.

The building committee did its homework, extensively researching building products and examining photographs of the church from the early 1900s. Fiber cement siding was selected to recreate a genuine clapboard-style look, the steeple was painstakingly repainted, and historically-accurate composite shutters replaced the old under-sized shutters that didn’t match the scale or character of church windows.

In addition to the striking window on the sanctuary’s façade, there are two other windows on one side of the church and three more on the other. As in the historic photo, two pairs of shutters are used for each window to bring back a significant historical touch. “There are actually 12 pairs of shutters on the church. It’s a subtle detail. On each window, two shutters correspond to the top sash and two correspond to the bottom sash,” Crowell explained.

Customized Louvered Colonial Shutters from Atlantic Premium Shutters were chosen, finished in a dark Evergreen color to stand out against the crisp white of the church sanctuary. Each shutter is approximately 28”x 42” so that each group of four shutters is proportionately-sized to the window.

“These shutters give you an authentic, traditional appearance… Homeowners who like a more textured, historic appearance to their house would certainly apprectiate that. It gives you that look without the sacrifice of having to paint every few years and worry that your shutters are peeling.”

“Back then, they frequently used the shutters for light control. Today, we could also use a shutter configuration for that. Having
four shutters per window is also a practical matter – they would have been huge one-piece shutters,” said Crowell.

Along with the shutters’ architectural accuracy and aesthetics, durability was a key factor. Hand-assembled using a patented
design, they are crafted with impervious, marine-grade fiberglass stiles and louvers. These Architectural Collection shutters by Atlantic, manufactured by Boral Building Products Inc., carry a limited lifetime manufacturers warranty that covers both the shutters and the factory paint finishes.

“With this renovation, the whole congregation was thrilled. There are those that really, really like the historic nature of the church,
and those that really want to minimize exterior maintenance,” Crowell explained. “The congregation is sensitive to costs and
didn’t want an ongoing maintenance headache. If not for the Atlantic shutters, I’m not sure what we would have done. It was
very fortunate that this product was available.”

Crowell initially had the opportunity to see Atlantic shutters on buildings at New Hampshire’s historic Dartmouth College.
Since the church’s renovation, he’s now recommending them to homeowners.

“Beyond the Community Preservation Act requirements, we’re also in a local historic district, so all the changes had to go
through a committee. I was so excited about this product, that I actually brought a sample because I wanted them to see it. Too
frequently, people say they can’t afford the maintenance of a real wood shutter. The committee is sensitive to cost so they often
allow more affordable shutter solutions, but these don’t bring the historical character. I wanted to let them know there was a
maintenance-free alternative out there with Atlantic shutters,” Crowell said.

“The shutters give you an authentic, traditional appearance. When you see the before and after photos of the church, the difference
is significant. Homeowners who like a more textured, historic appearance to their house would certainly appreciate that. It gives
you that look without the sacrifice of having to paint every few years and worry that your shutters are peeling.”

While the church’s original historic character was recreated and preserved, the building committee also had its next 200 years in
mind. In a simultaneous project, the church’s infrastructure was also significantly renovated. More eye-opening improvements
allowed it to enhance community services and further reduce costs. A new foundation, finished basement, additional groundlevel
space at the rear of the sanctuary and air conditioning were all added, along with tankless water heaters and more efficient
windows, light fixtures and controls. 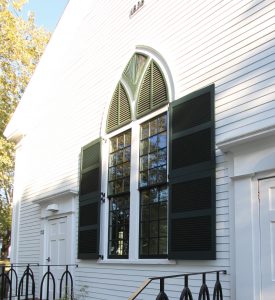 “The new basement contains a library along with showers and a washer and dryer. It really allowed us to advance our monthly overnight program of hosting the community’s homeless,” Crowell noted.

One feature in particular perfectly unites the church’s past and present; a solar array on a building adjacent to the sanctuary that powers the new air conditioning. “We calculated how much energy the air conditioning would use and figured out how large a solar array we’d need to offset that. We built an 8.2 kilowatt array and it has really worked out for us. With our improvements and conservation measures, we now spend considerably less on electricity and also less on gas, even with the addition of 3,500 s.f. to our facilities,” Crowell said. With all of its efficiency improvements, Dennis Union Church was recognized by the EPA as an Energy Star Congregation.

The church is now a beacon of both progress and preservation on the Dennis Village Green, a main civic and social gathering place. “One of the premises for doing this, restoring the church’s historic features, was that there was a substantial community benefit. That’s how we were able to receive the grant funds from the town. The historical renovation has made a big difference to the church and people comment on it all the time. It has really spurred others in the area to make improvements, which has resulted in a very attractive living-room type area for our town.

“The congregation is sensitive to costs and didn’t want an ongoing maintenance headache. If not for the Atlantic shutters, I’m not sure what we would have done. It was very fortunate that this product was available.”

Find a Atlantic Dealer Near You