The words elegant and shotgun would be hard pressed to be found in the same sentence. But both of these are accurate descriptors of the architecture of Rashida Ferdinand’s c. 1892 home in New Orleans’ Holy Cross neighborhood.

Particular to the South, historical shotgun-style homes are long and low, cozy and simply laid out with a rectangular footprint. In Ferdinand’s case, she had been renovating her home for about a year when Hurricane Katrina hit. An artist, lifelong New Orleanian and a hands-on home improvement enthusiast, Ferdinand had removed an interior wall to open up the house by turning two rooms into one large one. She had also added a fireplace, removed linoleum flooring and stripped the ceiling to reveal tongue and groove construction.After the storm battered the neighborhood and flooded her home with several feet of water, Ferdinand secured grant money to expand on her renovation and repairing. After mold remediation, significant first floor space was added at the rear of the home along with a camelback second-story addition. The first floor received a living room and bedroom, while the camelback added a 14’x14’ master suite. The renovation also included the outdoor living and entertaining space of breezy side and back porches, along with an upstairs balcony.

The exterior received a vibrant update, including the removal of metal security bars on the windows. Because of the historical nature of the neighborhood, features such as the brackets on the façade were kept. “My favorite thing about the new exterior,” said Ferdinand, “is the porch and the beautiful views out to the Mississippi River.” Her outdoor living ambience was also enhanced by new shutters that grace each of the home’s window and door openings, including several doorways and smaller, custom-sized windows. “They provide an extra decorative accent. I love the shutters and the color they bring.” Ferdinand selected the terracotta-like Canyon color for her Atlantic Premium Louvered Colonial Shutters. “The style of the shutters works with the historic fabric of the neighborhood,” Ferdinand said. Her yard also received new landscaping and a romantic fence with a gateway arch.

The comfort and beauty that reinvented the home’s exterior also extend throughout the interior. New maple mocha and butterscotch cabinetry was installed in the kitchen and pantry along with a butcher block island and quartz countertops. Historical elements were reused such as old flooring and a cast-iron clawfoot tub. “The French doors from the kitchen to the porch, the custom millwork and master bath tilework are all very nice,” said Larry Schneider, owner of Schneider Construction, general contractor for Ferdinand’s home. His company has specialized in historical renovations since 2002. “Almost all the homes we work on are over a century old. We’ve made a niche in fixing up properties like Rashida’s that many contractors shy away from because of the uncertainty and risk you can run into with whatever’s behind the walls of a 120-year old home.”

Schneider had suggested the Atlantic shutters that were used to deliver functional beauty for Ferdinand’s exterior. “In the old days, it was more common to have shutters on every single opening. With typical modern construction, shutters are more a decorative component versus a practical one. The fact that Rashida’s home has shutters at each opening, that’s pretty historically accurate,” Schneider said. Schneider had previously installed the Atlantic Shutters on another home in the same Holy Cross neighborhood. “The shutters look beautiful and they install very easily. They also come with a hefty warranty on the paint finish,” Schneider said.

“The style of the shutters works with the historic fabric of the neighborhood.” 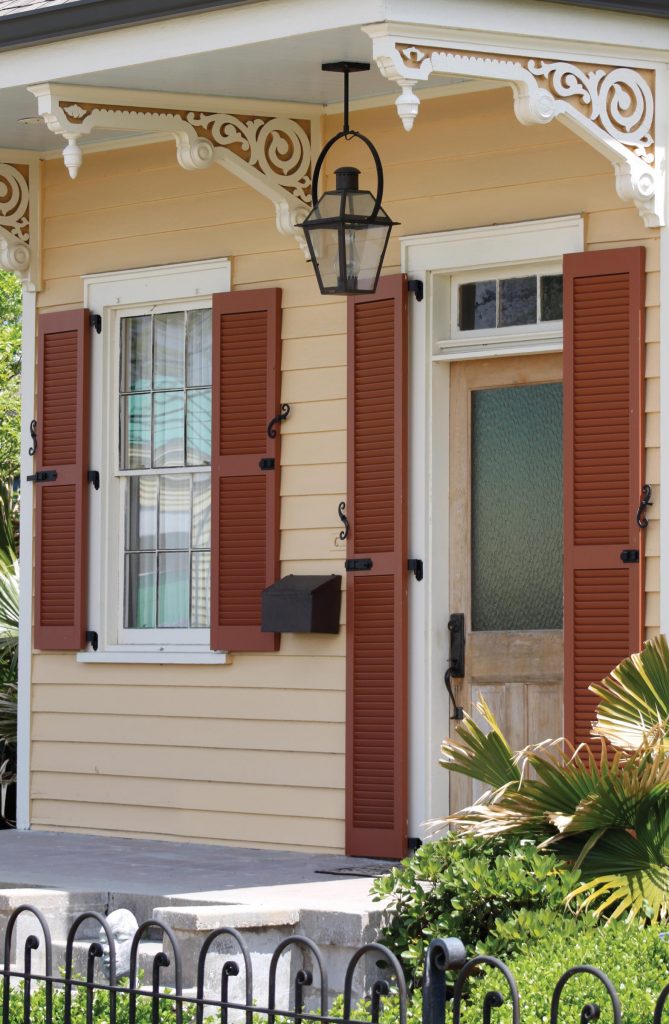 “Atlantic shutters are an extremely competitive product. By the
time you would buy a natural wood product and take the time
to prime and put on a couple coats of paint, and have to worry
about callbacks, it’s very competitive,” Schneider explained.
Atlantic’s Architectural
Collection shutters come with a limited lifetime structural
warranty and a 15-year factory finish warranty. “Customized
shutters from Atlantic only take about a couple weeks to
produce. With something like Spanish cedar shutters, the
turnaround could be several times as long. And in our climate
where you get a lot of moisture, especially in summer, that’s not
good for real wood that needs to breathe. For something like
closing shutters where you don’t have a lot of room for error, if
those were to expand or buckle in any way or stay untrue, the
wood could easily warp. Then we’d have a lot of callbacks and
we’d be out trying to fix them. “With Atlantic Premium Shutters,
we’re not going to have to worry about callbacks. That’s the
reason why I like to use them and why I recommend them to our
clients,” Schneider said.

In Ferdinand’s case, the shutters are also extremely practical.
“When the temperature starts climbing toward 100 in the
summer, you can close those shutters and keep that heat and sun from coming through. The shutters can really help keep the
home cool,” Schneider explained. “I open and close the front-door
shutters and first-floor window shutters every day,” Ferdinand
said. “I use them instead of the old metal security bars that used
to be on the windows. They’re easy to close and open,” she
noted. “My house has both historical and contemporary features
with various architectural elements that enhance its beauty and
also provide security and comfort. After the damage from the
storm, my renovation not only enabled me to have a space to
live where I could be comfortable – it also gave me a feeling of
hope and possibility for the restoration of my neighborhood,” said
Ferdinand. “I see my neighborhood as an extension of my home.
Returning to my neighborhood and living in my newly-renovated
house has been a motivation for me to work with my community
and support the efforts to rebuild it and make it a better place for
others to return home.”

Find a Atlantic Dealer Near You